Earth's Magnetic Field Beats Like a Drum: The Aura of our planet?

As technology on our planet exponentially progresses and we as a civilization begin to dissect and understand the nature of our reality; new discoveries are being made that explain our place in the cosmos on a deeper level. In 2019 NASA released the findings of THEMIS mission that has proved a 45 year old theory that the outer boundary of Earth’s magnetic field vibrates like a drum. This means that the Earth’s Electromagnetic field has some sort of resonance occurring in which it vibrates and oscillates.

The Earth’s magnetic field protects us from solar wind and harmful ultraviolet radiation; as well as protects the Ozone layer. It is basically our shield from the chaos of the Universe bombarding Earth and having a negative affect on our ability to live here. The five probes of the THEMIS mission observed plasma jets hitting the magnetopause which produced sounds throughout the magnetic bubble that Earth is encapsulated in. These resonant waves that are created affect the planet’s radiation belts, aurora, and ionosphere

The term Universe symbolizes music in itself. One Verse… one song. The mathematics of the universe is truly the understanding of vibration and frequency which is why the field of Quantum Physics is becoming increasingly popular to begin to explain the underlying nature of how this physical reality is manifested. If we are to look in ancient scriptures worldwide we realize that this awareness and these new discoveries are truly ancient wisdom being resurrected. Many past cultures spoke about the Universe being made of vibrations and frequencies and used metaphors to explain how it all worked. The graph below is a comparison chart of Metaphysical Terms and Quantum Physics… can you see the similarities? 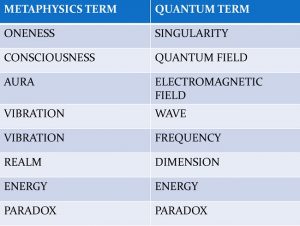 The Magnetic Field of Earth beating like a drum seems like common sense to many. All things vibrate and even the distances between planets are related to some sort of musical interval; as if we are in a grand cosmic dance of frequency interconnected with one another.

Science is now confirming that the idea of an aura around a human body is a reality.  Researchers have found that the aura is an electromagnetic field of energy that extends all around our body for about 4-5feet (in an average healthy body) and appears to be depleted in cases of an unhealthy person. This aura represents your physical, mental, emotional as well as spiritual energies. It also connects all subtle bodies and acts like a shield protecting the human vessel and absorbing specific energies.

So the question is could the Earth’s Electromagnetic field represent the physical, mental and emotional well being of our planet? Is the Earth’s Magnetic Field the aura of our planet? The subatomic frequencies within our body create an Electromagnetic field that encapsulates us protecting us and also absorbing and communicating with the outside world, other people and living beings. The Earth’s Electromagnetic field seems to be doing the same thing; protecting us from the hazards of space and also acting as an intermediary between the rest of the cosmos. All planetary bodies have their own magnetic field; therefore, have an aura. In a human, the aura is stronger based on their beliefs, diet and overall well being both mentality and physically. Therefore, it can be assumed that the Earth’s aura would also be healthy if the collective beliefs and overall health of all living beings on this planet were in a positive state and for the betterment of all.

There will be more discoveries about the world and how this physical reality is manifested; as well as how we can shift it using our own resonant frequencies, in the days and years to come. We are in exciting times of discovery and information and this is only the beginning. Check out Neil Gaur's presentation on Quantum and Metaphysics HERE to learn more about the frequencies of creation.

Neil Gaur is the founder of Portal to Ascension. He has been researching and producing  gatherings since 2008. He has spent time and worked with 100's of researchers and presenters globally that has provided him with a full circle perspective of the paradigm shift occurring on the planet. Neil has produced over 1000 events, conferences, tours and retreats intended to provide the world with a stream of consciousness expanding awareness on topics such as UFO Disclosure, Our True Ancient History, Sound & Frequency and The Ascension. He writes and creates presentations on these topics and more.

You can support independent conscious media and our global event productions with a contribution via Paypal, or Patreon.

Learn About Portal to Ascension